"The power of Foot Peace Ambassadors in Kamwenge!!"

Since 2016, Kali in conjunction with RWECO and HIVOS is implementing a project on communication actions to prevent and manage conflicts in Kamwenge part of the project across  Rwenzori region. In this project, KALI works with 10 trained peace ambassadors from the 10 CBOs in the sub counties of Nkoma,Busiriba,Kahunge,Nyabbani and Ntara. the FPA have organized grassroots sensitization meetings, The CBOs and FPAs have since the grassroots sensitization meetings been focal persons for guidance and support towards preventing conflicts in communities.

The picture below, KALI staff middle seated making a follow on FPA efforts on peace building and reconciliation at domestic level. the lady on the right side had divorced, but she went to our FPA on the left for help. Kemirembe intervened and the couple is now together.
By the time i made this field visit, the husband had gone on business trip. we reached him on phone,he acknowledged Gahuzamilyango (CBO that we work with)  efforts in bridging community on peaceful co-existence in Mpanga-Kahunge S/C) 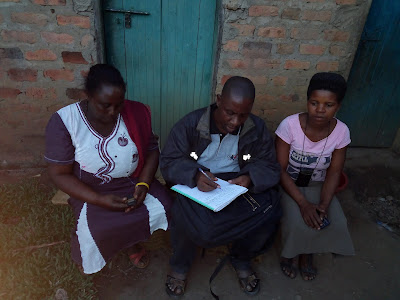 The picture below is Foot peace ambassador of (Amakondere CBO) making follow up on a woman who had been hated by community and they wanted to kill her on allegations of witch crafts in Kabale-Ntara sub county. Our CBO led by FPA Joseph sensitized communities through MDD at the woman's trading center and in the churches to send massage of peaceful co-existence and reconciliation to the citizens. the woman now lives in harmony with the people. 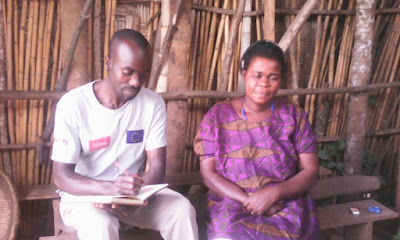 The video clip below is of our Foot Peace Ambassador in Ntara making follow on a human rights issue at a home of an elderly who servives through bagging yet living with vulnerable disabled girl who cant walk neither can she cook. He was lobbying & advocating for support to this vulnerabal Mzee.


KALI in conjunction with the 10 CBOs in Kamwenge has conducted a umber of grassroots sensitization in the five sub counties of; Kahunge, Busiriba,Nkoma, Nyabbani and Ntara. a lot has been achieved. many cases have been reported to the Foot peace ambassadors of the  CBOs and followed up. other cases have been forwarded to police & Sub county CDOs for further management.
The community based groups sensitize through churches, community meetings, Neighborhood assemblies, house to house as well as Visits to other organized groups in the communities of their reach. we use Music Dance & Drama, Sports for Peace among other approaches. 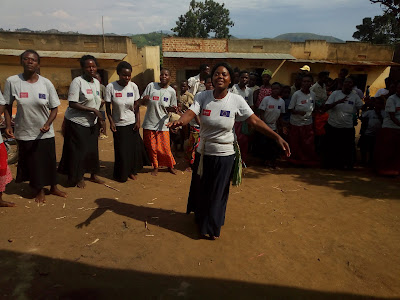 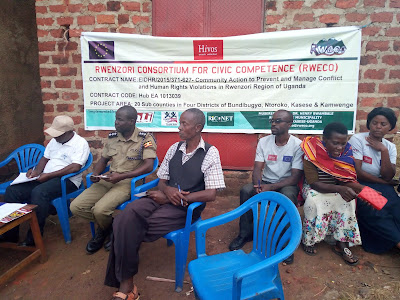 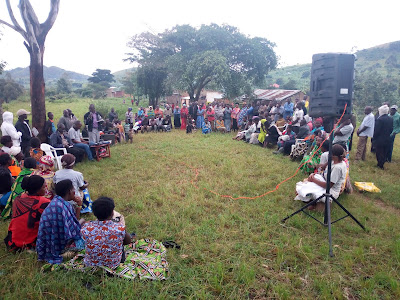 District CDO with C/Man LC.III of Busiriba S/C sharing on conflict prevention on land wrangles through the media. Radio talk show on voice of Kamwenge. 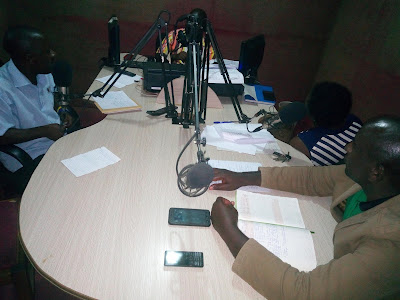 Engaging the youth in schools to prevent conflicts and report issues of human rights abuse. 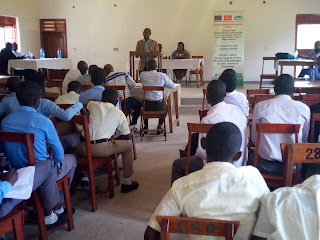 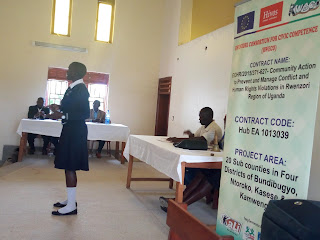 A above is student of Bigodi S.S. participating in a debate during the Inter-school debated.
The picture shows Anti Discrimination Team performing during the Peace day in Rwamwanja. 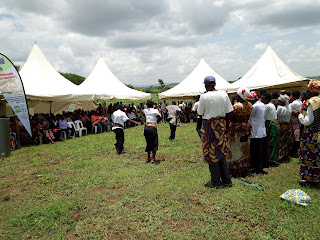 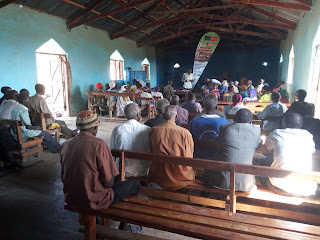 An elderly woman sharing how their children have denied them right to property by refusing to allow them sale part especially land for improving their livelihoods. this was in addition to fear by most elders that their children plan to kill them so as to remain with family assets. 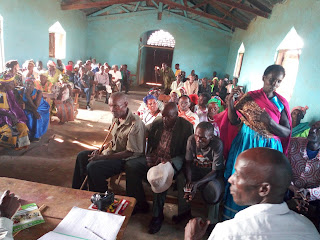 Thanks. This was pictorial report on grassroots sensitization on conflict prevention in Kamwenge.

KALI organizes an Elderly group of 300 members in Kamwenge District!

Picture below, KALI staff posing for a picture after grassroots sensitization meeting with the Elderly Group of Kiyagara of Kahunge sub county - Kamwenge. 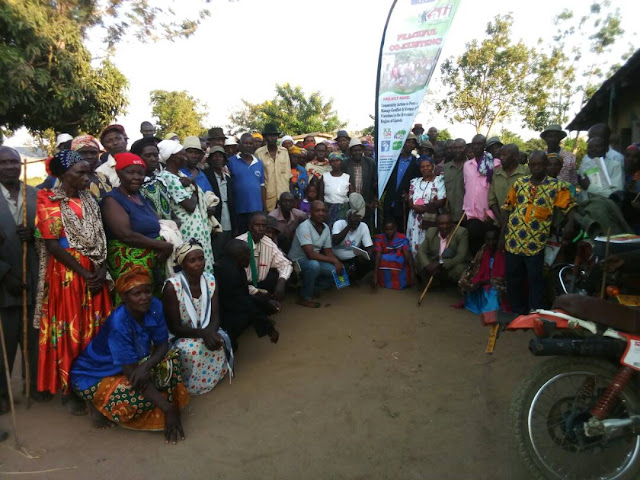 In line with the implementation of the community led conflict prevention, reaching to the elderly group is one of the key result areas. In Kamwenge, One group was identified in Kiyagara Parish of Kahunge sub county.
KALI has successfully organized this elderly group of over 300 elders both women and men into a registered CBO at sub county level. the Group had never been visited by any leader not until KALI identified them in RWEBIKWATO parish of Kahunge sub county. Over 80% of the elders group had never had of rights to property/assets. They had been for long been undermined by their children, who could not allow them to even sale any piece of land to enhance their livelihoods at house hold level. KALI connected them to sub county leadership and to the District with the C/man Elders forum who also never new them before.


The groups has focused it self in mobilizing the elderly women and men to ensure they collectively achieve in the areas of Human rights and economic empowerment.

The group had no constitution, not known at sub county level and the C/man Elders forum did not equally know they existed. With our efforts, The group has been organized to the level of registering at  Kahunge sub county with a formal constitution. the picture below tells it all. 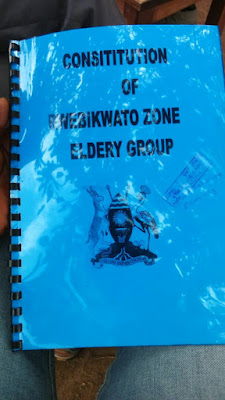 The picture below is of Canon Koleb, the Chairman Elders Forum who had been invited to go and meet, share with the leders group for the first time at Kiyagara C.O.U 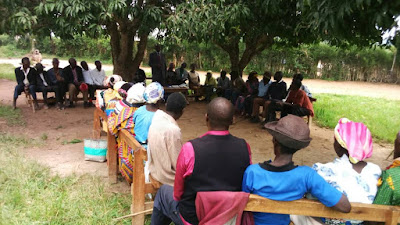 Thanks for reading this piece of article

KALI in partnership with RWECO and HIVOS are jointly implementing a project on community actions to prevent and manage conflicts and human rights violations in Ruwenzori region. The project is funded by European Union.This project targets different stakeholders including the community, policy makers,  PWDs, PLHA, the media practitioners, LG, enforcement officers and the youth in and out of school, cultural and religious leaders.

KALI joined other RWECO partners from Rwenzori for a learning visit to the Nothern region particularly GULU and AMURU Districts. The conflicts and human rights violations in the Rwenzori region are not in isolation as they tend to rotate around, culture, exclusion, discrimination and identity. Until the 1980s/90s when armed forces (NALU & ADF) fighting the government of Uganda took advantage of the already charged communities to wage war against the government. From that, there is need for the communities in the Rwenzori region to learn from other regions in the country on how they have participated in conflict prevention. Specifically the Acholi sub region that designed community actions towards rebuilding of the region after a total destruction. The muto oput  a traditional justice of reconciliation and recognized by the government contributed towards pacification  of the region.

Specifically, the learning visit focussed on participants;
To enable FPAs, staff, representatives of religious institutions and cultural institutions learn from the communities their role in the pacification of peace in Northern Uganda, participate in the muto oput ceremony of cultural reconciliation and
share lessons from the Religious, Political and Cultural leaders on their role in the pacification of northern Uganda

A team of 15 people from Kamwenge (FPAs, staff, representatives of religious institutions institutions) equipped with knowledge and skills of community,religious and political roles in pacification peace. 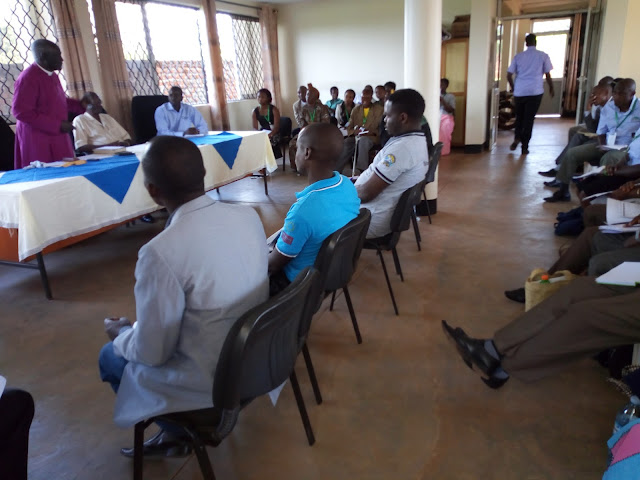 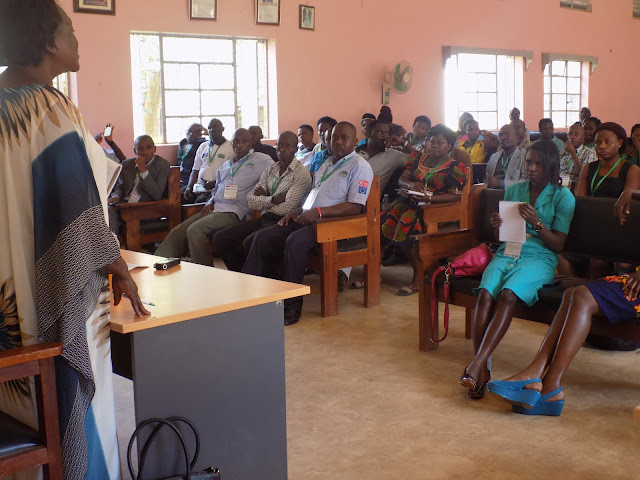 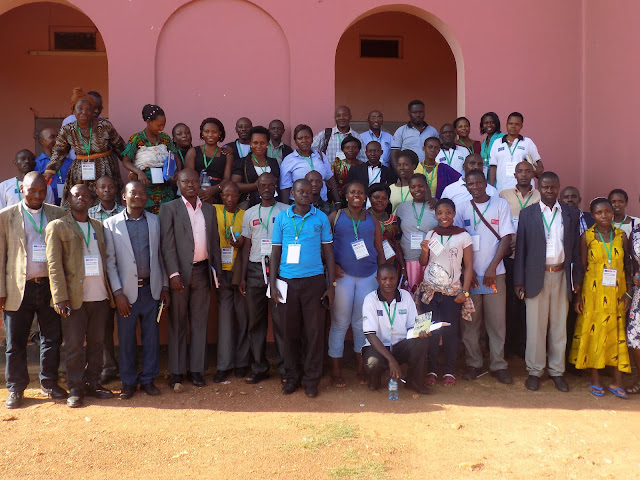 Below is Coordinator RWECO (short sleeved shirt with vest) sharing purpose for the learning visit with a community group that promotes peace in Amuru district. behind him is the learning team from Rwenzori. 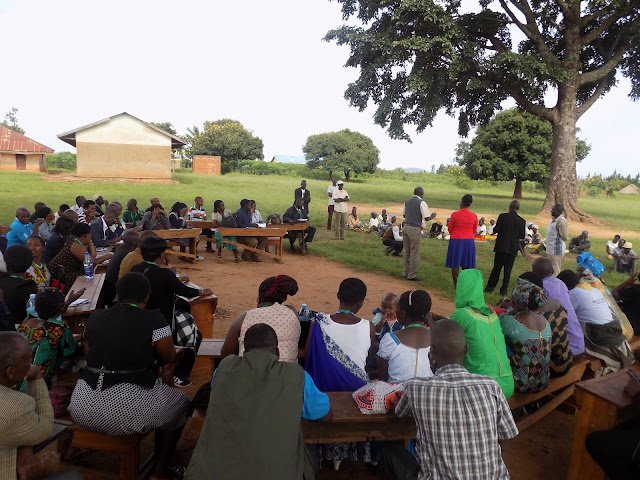 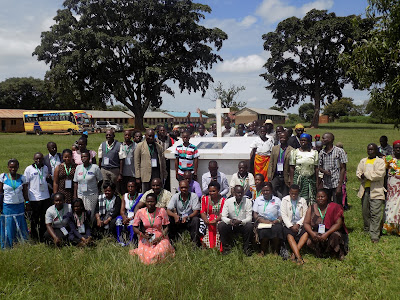 Effects of the war. a above is a visiting team taking picture at a mass grave of 22 people killed during the war. Picture below is a sharing from victimes of the war. women who were abducted by the LRA rebels and this group has mobilized 15 more groups of the same cause in northern region. 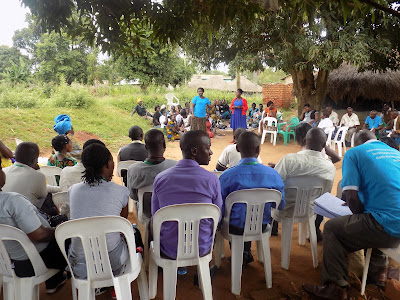 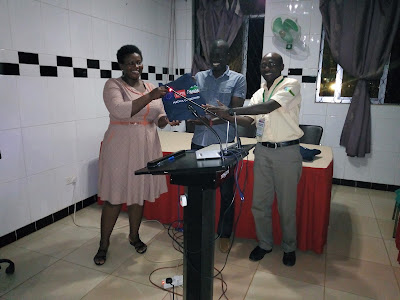 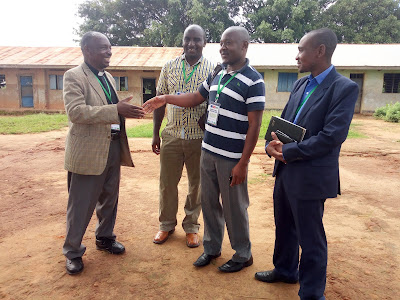 The true look of Mato upputi! Two men being taken through cultural reconciliation process. this picture is at JRP Office. the latest of this was in 2016. 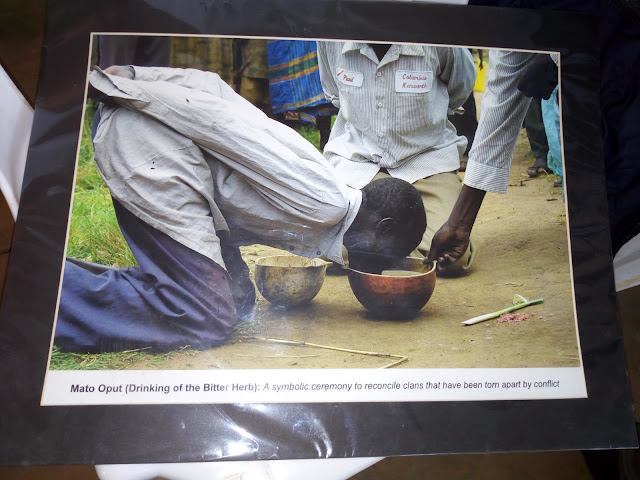 Picture below left  is Director KALI appreciating the role played by the victims of LRA war. women who were abducted by the LRA rebels promoted hand skills for earning a living to members and their children. this group has mobilized 15 more groups of the same cause in northern region 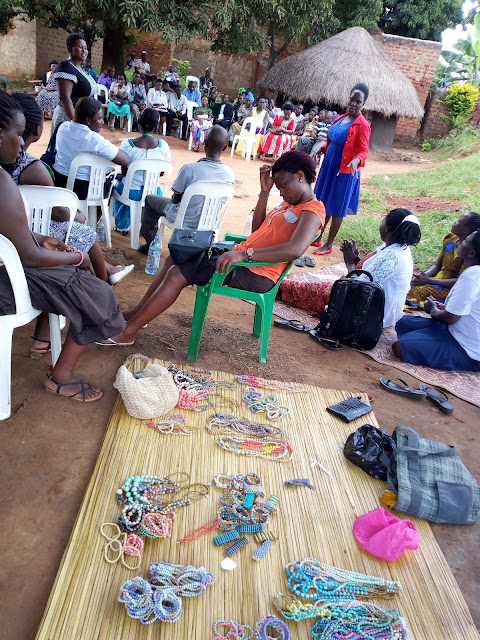 Picture below, two women group leaders from Kamwenge pose for photo with foot Peace promoter from Amuru District during the learning Visit. 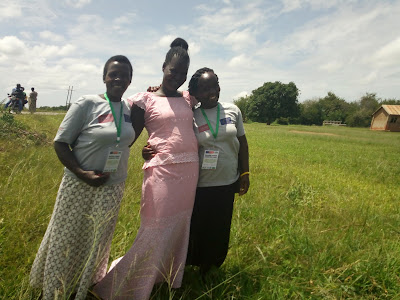